The guiding principle of experiential marketing is to create memorable, personal and shareable moments. To encourage audiences to actively participate with your brand. It’s no longer just one facet of the marketing plan, it’s now driving the strategy of everything from pop-up stores to global conferences. What started off as just consumer-facing campaigns has been fully embraced by the world of business-to-business. Finding new ways to showcase products in a unique and striking way.

Van Straaten is specialized in 360° sustainable visual branding. Working directly with brands, creative partners, designers and architects to create unforgettable experiences. So, what have we learned during our 100 years (yes, really, 100 years) in the design business? What experiences have inspired us? We believe in events that live and breathe interaction. Here are our top 20. We hope that they inspire you.

1. IKEA’s off the wall brand experience

When IKEA launched their 30th store in France, they celebrated by constructing a nine metre showroom. Except it was flipped on its side. Hand grips, steps and ropes were installed on the artificial wall for climbing purposes. Passers-by were invited to climb it, with a safety harness and guidance from a professional climber.

This was a very creative and effective way for IKEA to build social media chatter about the brand. Just as important, the furniture being used to support participants’ weight, also proved just how well built its products are, in a fun and interactive way. 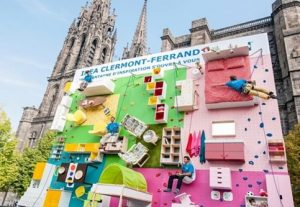 Dreamforce, at San Francisco 2018, was one of the largest and most successful tech events in history. When customers, partners, employees and key stakeholders of Salesforce gathered for a “family” reunion. 170,000 registered attendees who took over downtown San Francisco. Salesforce promised to leave attendees inspired, informed, and involved in the frontlines of innovation. The experience included 3,000 sessions in four days, working with and discussing new products. Key speakers included former American Vice-President, Al Gore. 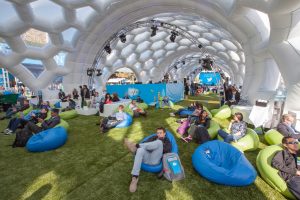 3. Breaking the ice with JetBlue

Winter is when people are thinking of and booking their flights to warm and sunny destinations. JetBlue knew this all too well, devising a clever way of promoting their new direct flights from New York to Palm Springs. They placed summer accessories inside a very large block of ice. New Yorkers were invited to break the ice in any way possible to claim their prizes, which also included free tickets to Palm Springs. The campaign created free online PR and a lot of buzz on social media. 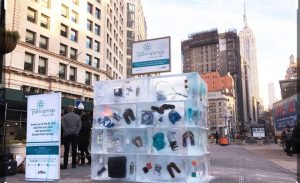 Experiential campaigns for brands can even address global issues. In 2013, Coca-Cola introduced “small world machines” in both India and Pakistan. The idea was that through virtual interaction, the difficult relationship between the two countries could be set aside for a moment for a genuine human connection.

These high-tech vending machines were placed in two busy shopping locations: Lahore, Pakistan and New Delhi, India. The machines had built-in cameras that allowed face-to-face live interactions. The objective was to work together with the person on the screen to achieve cooperative tasks such as mirroring each other’s movements and tracing images on the screen.

The campaign received many positive reactions from the press. More importantly, it proved that even a company making a fizzy drink can bring about positive change through their marketing strategies. 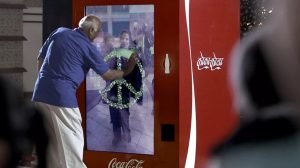 Rembrandt’s collection at the Rijksmuseum, Amsterdam was digitally remastered and exhibited all over the world. The world-famous Night Watch was particularly challenging because of its large size. Van Straaten used a special sublimation printer to perfectly recreate the painting. Even using Japanese paper, which Rembrandt himself used for the original painting.

Niels van Straaten, Director of Van Straaten: “We were delighted to have been able to partner on such a magnificent project. Printing a work on the scale of The Night Watch is a perfect example of the innovative services that Van Straaten offers its clients.”

Would you like to see 15 more inspiring experiential ideas? All you have to do is share your email address with Van Straaten.

Every year, woman’s lifestyle brand Refinery29 hosts the 29Rooms event. They call it “an interactive funhouse of style, culture, & technology.” It consists of 29 individually branded and curated rooms. People who attend the event can experience something different in each room. The rooms are designed and created with brand partners, including Dunkin’ Donuts, Dyson, and Cadillac. Also, personalities, artists and musicians.

The idea started off as a party for its staff. Refinery29 is now using these branded live events in Europe to drive audience and advertising growth. 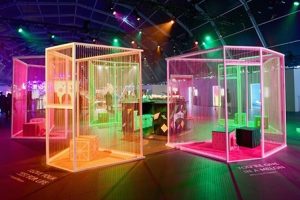 67% of B2B marketers say that experiential events are one of the most effective strategies they use. So, it made sense for General Electric to invite industry professionals to experience its Healthymagination initiative. The point of the campaign was to promote global healthcare solutions, especially in developing parts of the world.

Healthymagination was the perfect way for the audience to experience new products and services first hand. Covering difficult subjects in a creative, but respectful way. The learnings from this help provide better care to more people at a lower price. 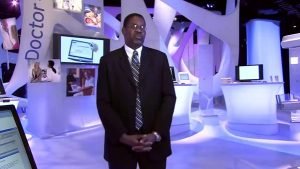 World Wildlife Fund (WWF) wanted to raise public awareness around the issue of animal trafficking.  WWF and The People’s Postcode Lottery produced a life-sized elephant hologram that roamed the streets of London for a week.

This particular activity was effective because it not only educated the public on the difficulties faced by these animals, but also physically placed them in the paths of the public. Bridging the gap between our modern world and the wild, helping us to understand the loss and knock-on effect this activity has on all of us. 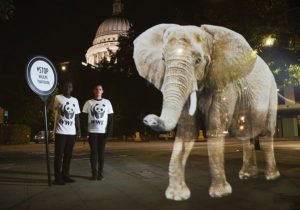 This experiential campaign featured a wall of weighing scales in Grand Central Station, New York. Aiming to reduce the negative emotions and anxiety women associate with the bathroom scale. Artist, Annica Lydenberg, helped bring the brand’s new messaging to life, by painting hundreds of bathroom scales. Shifting away from “dieting” and focusing on “healthy lifestyles”.

The programme began with a call to action on Lean Cuisine’s social media channels. Consumers were invited to tweet what’s important to them and to truly “weigh what matters”.  These messages were collected and painted onto individual scales by Lydenberg.

On the day of the activation, consumers could stop and contribute their own messages, which Lydenberg then added to the installation. 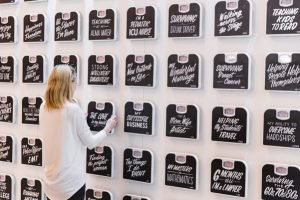 Kit Kat took its world-famous slogan “Have a break, have a Kit Kat” to the streets of Amsterdam.

Making it relevant for today’s over-connected consumer. “Free No Wi-Fi’” zones were created throughout the downtown area using benches with Wi-Fi jammers that block signals within a five metre radius. 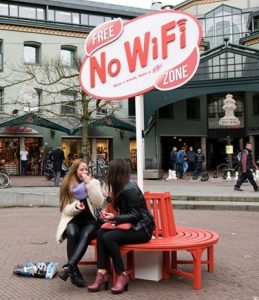 The 2017 Summer Universiade is an international sporting event in Taiwan, with 145 nations participating. The local government of Taipei City promoted the event by transforming subway trains into realistic simulations of sport venues. 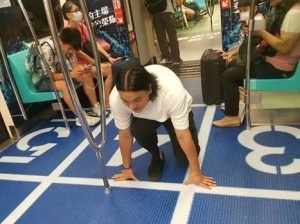 The famous London Royal Opera House was magically transformed into a museum celebrating the history of the Olympics. Van Straaten used tension fabrics that were more than 200 metres in length, stretched out by a sustainable aluminium frame. Static and projected images blended history and movement.

The team had just 36 hours to erect and complete the whole display, because the opening had to tie in with the opening of the London Games.  We were more than ready for this Olympian challenge. 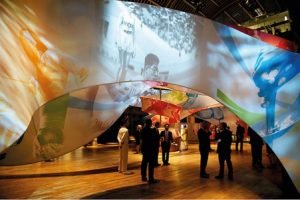 13. Adidas: working in a shoebox

Sometimes an experience can be so simple, attention-grabbing and Instagrammable. This giant shoe box pop-up store started life in Amsterdam. It got talked about, written about and shared on social media by millions of people. Later, it was transported and used in all the major capitals of Europe. 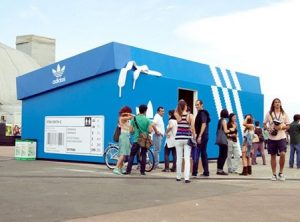 14. Volkswagen. All the right notes

The Piano Staircase Initiative by Volkswagen won creative prizes all around the world. The YouTube film was viewed over 23 million times. This very cool experience was part of the “Theory of Fun” campaign. Volkswagen converted a set of steps in Stockholm into working piano keys The idea was to encourage people to take the stairs instead of the escalator. Encouraging people to change by making things more fun.

Guinness is renowned for its out of the box creative thinking. In this case, Guinness-branded flight attendants entered bars across the UK. They surprised customers with the chance to win all kinds of prizes. All they had to do was order a pint of Guinness, then the flight attendant would shake the prize-generating mobile tablet.

One customer every evening won a free flight to Dublin in a private jet with four friends. Despite the brand being 261 years old, by using experiential marketing, it can still reach a young target audience. 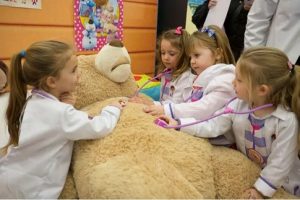 Vans is the brand of choice for skateboarders. It was a natural fit to create the House of Vans pop-up locations at skateparks in the larger US cities. Introducing new shoe lines, while also giving skateboarders a place to meet up, connect and play live music. 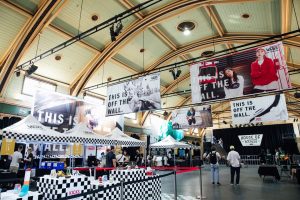 Young children have a very close emotional relationship with their stuffed toys. If they are lost or damaged it can be a rather traumatic experience. Doc McStuffins used this insight to create Doc McStuffins Bear Hospital, a pop-up clinic that travelled throughout the UK. Staff dressed as doctors would pretend to give the stuffed toys a medical and make any necessary repairs. Parents could also buy new Build-a-Bears.

While waiting to be seen, children could play with Build-a-Bear toys or watch children’s TV in a waiting area. 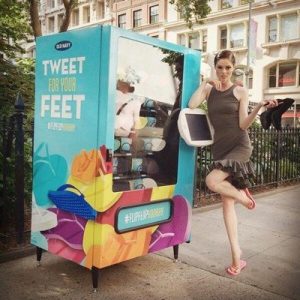 How do you create a buzz for your flip flop sale? It’s not as difficult as it seems. Old Navy created flip flop vending machines. All potential customers had to do was tweet their favourite vacation spot for wearing Old Navy, using a hashtag. The flip flops were then dispensed from the machine.

This experience generated over 9,000 tweets mentioning Old Navy. Better still, 12 million impressions on social media. The idea was even covered by the American business magazine, Forbes.

19. Tesla. The product and Elon Musk

Tesla, like Apple make the product the hero. The comparisons don’t end there. Apple had a tech guru in Steve Jobs, Tesla have their own enigmatic tech guru in Elon Musk. Even a tweet from Elon is front-page news. Events are easy for Tesla. Show their cool new product or let Elon Musk write, speak or dance in front of the camera.

You can tell people 4G is fast. you can run poster campaigns and online digital campaigns. However, the best way to advertise 4G is by letting people experience it for themselves. Or at least an experience that helps them understand speed. Vodafone cleverly added a very well branded slide in a shopping mall, next to the escalator. 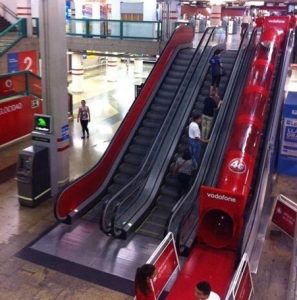 CES 2019, Las Vegas is the world’s proving ground for technological innovation and engagement. Who better than Google to lead the way? With the biggest and most talked about presence at the event. Google built “The Ride” as a theatrical tour of Google Assistant with lifestyle vignettes, music, smells, strobe-lights and other multi-sensory effects. Engagement par excellence. Making product demos and chats seriously fun.